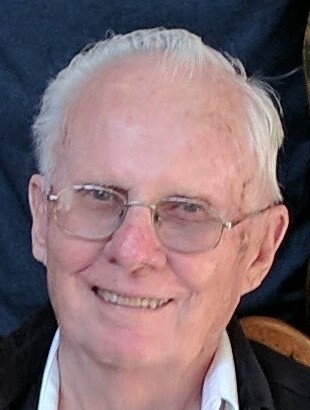 Dick was born in Brooklyn, NY, the son of Baptist minister Howard Kerr and Mary Kerr. He was one of seven children. He attended Maryville College in Maryville, TN, and then enlisted in the US Navy. Rising to Lt. Commander rank, he served actively for eight years and then settled in California as a reservist for a total of 20 years with his first wife, Lesta.

After the Navy, Dick became a schoolteacher, then a high school counselor, with Concord’s Mt. Diablo Unified School District, and finally retired in 1992 as vice principal of its Adult Education division. After he and Lesta divorced, he met and married Betsy Ehlers, a Special Education teacher in the school district, 33 years ago.

Upon retirement, they moved to Placerville and found property with a renovated studio in order to care for Betsy’s first husband, Jack, who had developed dementia and bipolar disorder. Jack died in 2003.

Dick and Betsy were active with the United Democrats and enjoyed years of square-dancing with the Placerville Apple Jacks and Jills. They took a nine-month RV tour of the US in 2001, and finished visiting all 50 states and capitals in 2004. Since Betsy’s daughter, Alison, was lead vocalist on Princess Cruises, they enjoyed accompanying her on cruises to Japan, Australia, UK, Italy, Greece, and Israel.

After their 2-story house on an acre became too much to handle, Dick and Betsy moved to a smaller home in Placerville’s Eskaton Village in 2016, situated on a canyon facing a beautiful western sunset. There, Dick contentedly watched golf and his beloved 49ers football team on TV with his cat, Dolly, on his lap until he became fatigued and decided to finally close his eyes in farewell.

Dick was well-known and well-admired for his sweetness and kindness, and his compassionate care for others.  He was adored by those who knew him.

A Celebration of Life will be held in January. Dick’s ashes will be interred at the Sacramento Valley National Cemetery in Dixon, California.

Share Your Memory of
Richard "Dick"
Upload Your Memory View All Memories
Be the first to upload a memory!
Share A Memory